Two decades ago, I bought a book.

In producer-speak, that means I acquired the rights via option to make a movie from a book. I knew a TV news reporter, and she had made contact with a reclusive author who wrote a book she thought I might be interested in. Actually, “reclusive” is too weak of a term; we both had determined that the author was in hiding. Contact was difficult and cryptic. Nonetheless, he and I got on the phone, and he figured that I would be someone he’d like to work with to get his book made into a movie, and I liked the deal, too. We sealed the deal without ever meeting.

The book was A VENOM IN THE BLOOD. It was a New York Times bestseller about our nation’s only husband-and-wife serial killers, told by the cop who busted them.

Wow. I gotta tell ya, THAT is a damn fine pitch. It got me in the doors at various studios (this was back when I still had some clout anyway, when there were still a few people in Hollywood who thought of me as “someone to watch”). I took that pitch to places like TriStar, Republic and other studios.

For me, it was an ugly subject. I had to research serial killers and try to assess character arcs and motivations and such in order to create a compelling screenplay from the novel. I learned a lot about serial killers, and to this day feel dirty and creepy whenever the subject comes up. I learned, for instance, that most serial killers – from Jack the Ripper to whoever shows up on the news tomorrow – are driven by sexual problems, and often target prostitutes. Most of us, myself included, didn’t know that, because the popular media would be too polite to report that the victims were prostitutes (that’s beginning to change now that there’s less stigma attached to prostitution).

There is an evil and perverse logic to that, I discovered. When one considers sex to be power (and many do, rather than an act of shared intimacy or something tremendously fun), and one validates one’s own life via sexual conquest, then the notion that having sex with someone who ultimately still demands money rather than showering the aggressor with adoration can be seen as a triggering event. Sex is seen as power, and then killing is seen as even more power.

Throughout history, and throughout the future, authorities every few months determine that there is a serial killer behind what appeared to be random murders. (Serial killers, unlike “spree killers,” have methodologies that are not readily apparent and are usually spread out over long periods of time.)

Quite sick and perverted.

That’s what the studios thought, too.

My timing was bad. While I was working out the screenplay strategy and pitching the idea to studios, they were reeling from a public backlash to Oliver Stone’s NATURAL BORN KILLERS, which had been generating a lot of controversy for its bold showing of senseless killing. No matter how logical and interesting the pitch was for A VENOM IN THE BLOOD, they all said, “Oh no, nobody’s going to do another serial killer movie.” 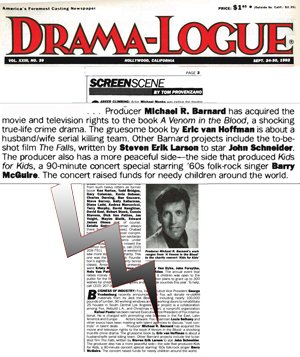 Drama-Logue – Barnard buys A Venom in the Blood

I lost everything I had been working on.

But, I still have one of the best pitch lines ever: “It’s the New York Times bestseller about our nation’s only husband and wife serial killers, told by the cop who busted them.”